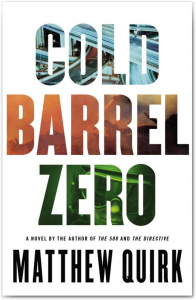 Selected as an Amazon Best Book of the Month

“Quirk takes a major step forward. The story is expertly stripped down, the action relentless, and the characters multilayered. A lethal game of cat and mouse fuels Quirk’s third and best novel, a military spy thriller in which one all-out conspiracy is met by another.”—Kirkus

“Matthew Quirk has elevated to must-read thriller status faster than seems possible. Cold Barrel Zero is a brilliantly researched and written tour de force from an author who understands both high-stakes action and fine writing.” ―Michael Koryta, bestselling author of The Prophetand Those Who Wish Me Dead

“Quirk goes flat-out explosive in this superior military adventure novel. The riveting battle scenes are the best in the business. Reader will look forward to seeing more of the skilled and deadly John Hayes.”—Publisher’s Weekly (starred and boxed review).

Praise for The Directive: 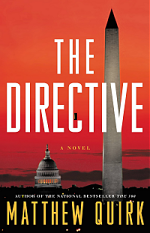 “The Directive is a nonstop, heart-pounding ride in which moral blacks and whites turn gray in ‘the efficient alignment of power and interests’ that is big-time politics. Quirk has another high-powered hit on his hands”
—Booklist (Starred Review)

“Sustained by Quirk’s research, an engrossing plot, the ever-increasing tension of a deadly cat and mouse game, and high stakes, this page-turner will attract not only fans of such financial-thriller authors as Christopher Reich and Joseph Finder but all those looking for a fun, fast-flowing beach read.”
—Library Journal

“[A] thrilling sequel to the superb THE 500…Fascinating details (how to pick which locks, how to con trusting people), along with Ford’s character and his relationship with ultra-understanding fiancée Annie, combine with a relentlessly charged plot to create another stellar thriller.”
—The Cleveland Plain Dealer

“Fast-paced sequel to THE 500…Quirk keeps the action credible, from Beltway backstory to the white-knuckled caper at the New York Fed.”
—Publishers Weekly

“There’s enough action for three thrillers and plenty of twists and turns.”—Kirkus Reviews 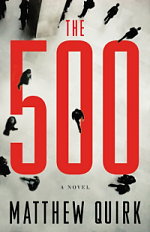 “The Firm goes to Washington, only with a whole lot more action.”
—James Patterson

“In his first novel, journalist Quirk takes on the Washington D.C. power structure in a thundering David-and-Goliath tale of corruption…This is a real page turner, with high stakes action that doesn’t stop. Expect this to be one of the season’s most talked-about debut thrillers. A sequel is in the offing and will be much anticipated.”
—Booklist (Starred Review)

“Quirk’s engaging first novel transplants the milieu of Grisham’s The Firm to the world of political lobbyists…Quirk supplies just enough characterization and journalistic detail of Washington, D.C. life to ground his story as he launches into a streamlined, gripping man-on-the-run thriller.”
—Publishers Weekly

“A gripping new Beltway white-knuckler…Quirk is such an expert in escalation that, like a frog in a pot of boiling water, you’ll be done before you even realize it.”
—Entertainment Weekly. A- grade and featured on the Must List.

“This gripping debut novel by Matthew Quirk will have readers enthralled from the opening sentence… The action never lets up for a second, and the pages cannot be turned fast enough as Ford’s life begins to unravel.”—The Associated Press

“What an absolutely phenomenal, kickass thriller. Not since The Firm has a novel left me this breathless. This one’s going to be huge.”
—Joseph Finder, New York Times bestselling author of Paranoia and Buried Secrets

“The 500 is a riveting page-turner in the tradition of John Grisham’s The Firm. It’s smart, intriguing, packed with action and heart, and loaded with detail on the hidden workings of Washington. It’s going to be the big debut thriller of the year.”
—Jeff Abbott, New York Times Bestselling Author of Adrenaline

“The 500 delivers a whole new level of urgency and political relevance — and high-octane storytelling — all in the smart, sharp voice of a con-man turned Washington insider. Get ready to cancel appointments for this one. Full of fascinating detail, gritty action and the ever-appealing lure of the con, The 500 won’t let you put it down.”
—Zoe Ferraris