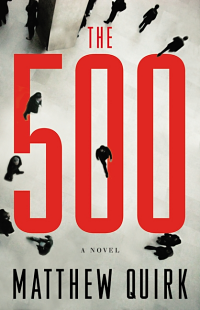 A year ago, fresh out of Harvard Law School, Mike Ford landed his dream job at the Davies Group, Washington’s most powerful consulting firm. Now, he’s staring down the barrel of a gun, pursued by two of the world’s most dangerous men. To get out, he’ll have to do all the things he thought he’d never do again: lie, cheat, steal–and this time, maybe even kill.

Mike grew up in a world of small-stakes con men, learning lessons at his father’s knee. His hard-won success in college and law school was his ticket out. As the Davies Group’s rising star, he rubs shoulders with “The 500,” the elite men and women who really run Washington — and the world. But peddling influence, he soon learns, is familiar work: even with a pedigree, a con is still a con.

Combining the best elements of political intrigue and heart-stopping action, The 500 is an explosive debut, one that calls to mind classic thrillers like The Firm and Presumed Innocent. In Mike Ford, readers will discover a new hero who learns that the higher the climb, the harder–and deadlier–the fall.

—In development as a major motion picture by Twentieth Century Fox

Read an excerpt     View the book trailer     Buy the book

“A thundering David-and-Goliath tale of corruption…This is a real page turner, with high stakes action that doesn’t stop. Expect this to be one of the season’s most talked-about debut thrillers. A sequel is in the offing and will be much anticipated.”
—Booklist (Starred Review)

“The Firm goes to Washington, only with a whole lot more action.”
—James Patterson

“Quirk’s engaging first novel transplants the milieu of Grisham’s The Firm to the world of political lobbyists…Quirk supplies just enough characterization and journalistic detail of Washington, D.C. life to ground his story as he launches into a streamlined, gripping man-on-the-run thriller.”
— Publishers Weekly

“What an absolutely phenomenal, kickass thriller. Not since The Firm has a novel left me this breathless. This one’s going to be huge.”
—Joseph Finder, New York Times bestselling author of Paranoia and Buried Secrets