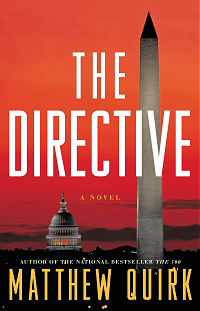 Two brothers. The heist of a lifetime. The stakes: their survival. After escaping from the back rooms of Washington, Mike Ford is now playing for his life against the titans of Wall Street.

Mike’s brother has been trapped in a powerful conspiracy to steal a secret worth billions from a hidden linchpin of the American economy: a real-life, little-known trading desk at the Federal Reserve Bank of New York. Forced to choose between an honest life and his only sibling, Mike returns to the dark skills of his past in order to accomplish the job himself. Cornered by the dangerous men in high places, he will beat them at their own game or die trying.

The Directive is Matthew Quirk’s follow-up to his national bestseller The 500, which was nominated for the Edgar Award and won the International Thriller Writers’ and Strand Critics Award for best first novel. The protagonist, Michael Ford, returns in a sequel that combines sharp narrative voice with fast-paced suspense. Both books have elements of some of the greatest, bestselling thrillers of recent memory, including The Firm and the novels of Harlan Coben and Lee Child.

Buy the book
Read an excerpt

Praise for The Directive

“This is a nonstop, heart-pounding ride in which moral blacks and whites turn gray in “the efficient alignment of power and interests” that is big-time politics. Quirk has another high-powered hit on his hands.”—Booklist (starred review)

“Sustained by Quirk’s research, an engrossing plot, the ever-increasing tension of a deadly cat and mouse game, and high stakes, this page-turner will attract not only fans of such financial-thriller authors as Christopher Reich and Joseph Finder but all those looking for a fun, fast-flowing beach read.”—Library Journal

“[A] thrilling sequel to the superb THE 500…Fascinating details (how to pick which locks, how to con trusting people), along with Ford’s character and his relationship with ultra-understanding fiancée Annie, combine with a relentlessly charged plot to create another stellar thriller.” —The Cleveland Plain Dealer